As we reflect on 2019, we certainly have a great deal to celebrate and for which to be grateful.  Sure, today’s news can be discouraging, and grim headlines certainly get most of our attention.   Based on a recent Pew survey, roughly 70% of Americans feel worn out by the news.  Does that hit home with you, too?

Okay, but what about the glass half full view? This year produced many success stories and powerfully good news, both nationally and worldwide.  According to Jessica Stillman of Inc. This Morning newsletter, there were several good news stories in 2019 including a few firsts:

And closer to home many of us here at MAP Environmental Inc. experienced positive and encouraging highlights this year, including a few firsts of our own.

During the Summer, our Office Manager Fran Williams celebrated a rare day at the Virginia Beach oceanfront with her two adult daughters, son-in-law and four grandchildren.   Building beach sandcastles, swimming in the ocean, and walking on the boardwalk while celebrating her daughter’s 20th wedding anniversary were a treat and helped Fran and her family make joyful lifelong summer memories.

Our Senior Environmental Scientist, Molly Bertsch and her family recently enjoyed their annual visit to Busch Gardens and Christmas Town.  Not only did Molly’s children – Frankie and Alice – visit Santa but they were finally tall enough to ride the roller coasters – a first in the family!  According to Molly, the looks on her children’s faces were priceless.

Andrew Pocta and his wife Cristina and children, Maria (7) and Andrew Joseph (4), had an eventful, blessed year and, as another first, all travelled to Honduras in Spring 2019 to participate in their ongoing mission with Missioners of Christ.  Their children, Maria and Andrew Joseph, also experienced indoor skydiving and surfing as part of the 2019 Life Rolls On event at the Virginia Beach oceanfront in August 2019!

Lastly, during the Thanksgiving holiday, Myles and his wife Rene’ and entire Pocta family gathered together at First Landing State Park for a rare family photo.   It was a short but sweet opportunity to capture for the first time all seventeen of the family, including seven grandchildren and their newest addition, Charlotte, at one of the crown jewels of Virginia Beach. 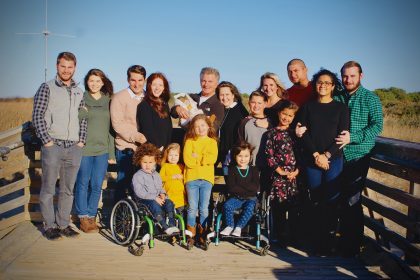